Introduction and next steps

What did we change?

What does the data tell us?

Finding 1: We are receiving fewer reports

Finding 2: Feedback indicates that firms are engaging with their accountants over qualified reports

Finding 3: We can focus our resources on identified risks

Finding 4: We are collecting less information that we do not use

Finding 5: We are taking action in a similar number of cases and there are no indicators that we are missing matters that lead to consumer detriment

Finding 6: We are still seeing reports being unnecessarily qualified

The exemption from obtaining an accountant’s report 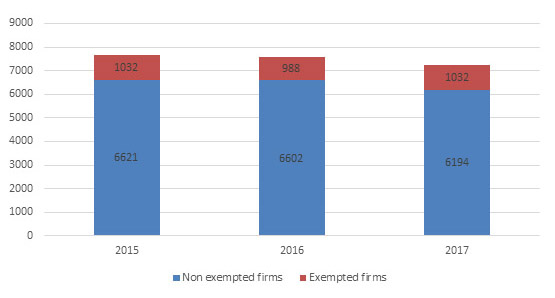 The figures for 2013 and 2014 are indicative of firms that would have been exempt from obtaining a report in these years, as the exemption was not introduced until 2015.

What changes have we seen?

We review all qualified reports that are submitted to us. We have identified three common reasons for qualifying reports which seldom lead to further action. These are:

We still receive many accountant’s reports. The standard of reports is generally high. However, there are some reports that could be improved.

A good report provides us with clear information on:

This should enable us to decide whether to investigate further without having to contact the firm for further information.

The examples below have been taken from real life reports we have received. They have been anonymised.

Examples of reports where improvements could be made

Some of the reports submitted to us do not contain all the information we need to decide whether to investigate.

The following are all examples of accountant’s reports that should probably not have been qualified, although in most cases more information is required to be sure of this. The Reporting accountants should have included further information if a qualification was warranted, and where they have identified a risk to client funds.

Example 3: Report that could be improved

Example 4: Report that could be improved

There were several instances of client money not being returned to the client as soon as there is no longer any proper reason to retain those funds, and not informing the client in writing of the amount of any client money retained at the end of a matter, which is a breach of rule 14.3 and 14.4 respectively.