How diverse are law firms?

We collect diversity data from the law firms we regulate in England and Wales. Firms ask their staff to respond to a standard set of diversity questions and then report this data to us.

Our most recent collection was in August 2017 when 92% of law firms reported their data. This includes information from nearly 180,000 people working in almost 9,000 firms. 74% of firms had a response rate from their staff of 90% or more.

This data covers just over 70% of solicitors who hold a practising certificate.

The diversity questionnaire uses 12 role categories, which we have combined to form five groups within the law firm diversity tool:

For ease of reference we refer to the solicitors/other lawyers category as solicitors.

We used recognised statistical techniques to model the data used in the law firm diversity tool to give us a more accurate picture. We do this by estimating what the responses would be if we had complete answers from everyone and no-one selected prefer not to say.

The adjusted data may be less reliable for those categories with lower response rates, and a warning will be displayed on the screen when using the law firm diversity tool.

Response rates for all lawyers

People can choose not to answer the entire set or specific questions, so response rates within firms are variable.

You can view the raw data collected in 2017 for the five groups we have used for our analysis. This includes the 'prefer not to say' and the invalid responses, where people did not select one of the options provided by the questionnaire.

The raw data for all lawyers, shows that for most questions we had good response rates. Although the changes are small, the response rates were better than in 2015 by 1% for all categories, except for disability and gender which were both down 1%.

Response rate for all lawyers in 2017 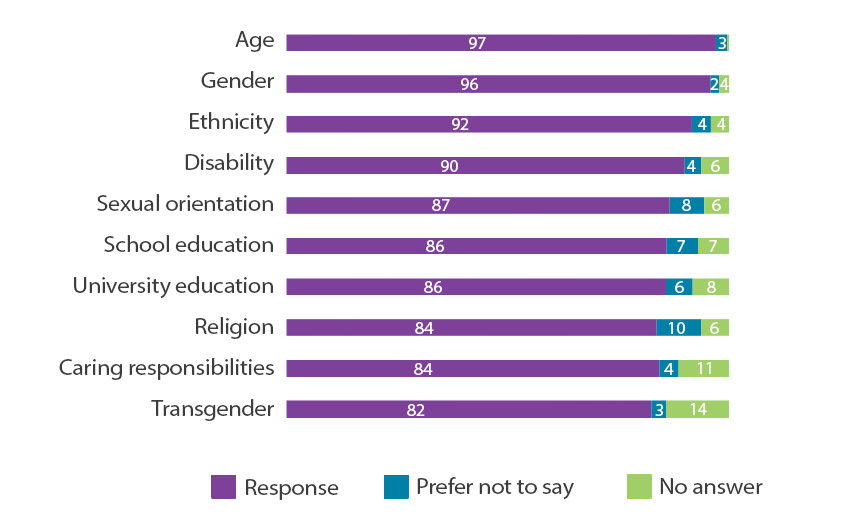 We have set out the key findings for each of the diversity categories, including comparisons of the data between firms of different size and work type. We determine firm size by the number of partners, ranging from one partner to over 50, and firms are classed in a particular category if they have told us they do 50% or more of that work type. More information about the available comparisons is set out law firm diversity tool.

As we have collected this data three times over the past four years (2014, 2015 and 2017) we have highlighted some of the apparent trends. However, it is widely accepted that workforce data sets such as these are only likely to show significant changes over a much longer period of time.

Women make up 48% of all lawyers in law firms and 47% of the UK workforce1. For the other staff working in law firms, women make up three quarters of the workforce. There has been little change since 2014 in either group.

Differences become more apparent when we look at seniority. In 2017 women make up 59% of non-partner solicitors compared to just 33% of partners (up from 31% in 2014).

The difference is greater still in the largest firms (50 plus partners), where 29% of partners are female.

There are small but welcome signs of progress in the largest firms however, as the gap has narrowed over the past four years, with the proportion of female partners rising steadily from 25% in 2014 to 29% in 2017.

Looking specifically at solicitors in these mid-size firms, the highest proportion of female solicitors is in firms which have six to nine partners. In these firms, two thirds (66%) of solicitors are female and this has grown over the past four years (from 60% in 2014).

We provided an additional option for the gender question in 2017, for people who preferred to describe their gender identity other than as male or female. Less than 1% (under a hundred) of all lawyers chose this response and because the numbers are so small we have not added this category into the law firm diversity tool.

In our first set of diversity data about transgender, we found out 2% of solicitors, 2% of other staff and 1% of partners confirmed that their gender identity was different to that assigned to them at birth.

For reporting purposes, we refer to those people as transgender (or trans) although we recognise the term might not be the preferred term for everyone. There are some variations by firm size, for example, in firms with six to nine partners, 3% of partners and 4% of other staff reported as trans.

There is a lack of good quality statistical data about transgender people in the UK but the Gender Identity Research and Education Service gave evidence to the House of Commons Women and Equalities Committee Transgender Equality Report estimating that approximately 1% of the population are transgender.

The proportion of Asian lawyers in law firms is 14% compared to 6% of the UK workforce.4 Asian lawyers make up two thirds of all BAME lawyers.

Unlike the profile for women, there is very little difference by seniority among BAME lawyers, 21% of solicitors are BAME compared to 20% of partners.

However, differences become apparent when we look at the breakdown of partners in firms by size. The largest firms (50 plus partners) have the lowest proportion of BAME partners - only 8% which has risen by 1% since 2014. This contrasts with one partner firms, where just over a third (34%) of partners are from a BAME background.

The proportion of people in law firms who reported that they have a disability appears to be lower than the wider population. Only 3% of all groups working in law firms report that they are disabled compared to 10% of the working age population in employment in England and Wales that are disabled6. There may be an element of underreporting.

There has been an increase of 1% for all groups in law firms since 2014. In the largest firms (50 plus partners) the proportion of lawyers with a disability is 2% and for other staff it is 4%.

A greater proportion of lawyers identify as lesbian, gay or bi-sexual (LGB) in law firms (3%) compared to the UK population7 (2%), although Stonewall estimates the UK figure is higher (5 to 7%). 8% of lawyers preferred not to say and 6% provided no answer or an invalid answer to this question which may indicate underreporting.

Although the numbers are small, we have seen a fall in the proportion of partners who do not identify as heterosexual in the largest firms (50 plus partners), falling from 6% in 2014 to 4% in 2017.

Christians form the largest proportion of all lawyers at 51% which is down 6% from 2014. Those who had no religion or belief (including those reporting as atheists) form the second largest group at 30%, up from 29% in 2014.

The next largest faith group is Muslim up from 5% in 2014 to 8% in 2017. The remaining faith groups are 3% for Jewish and Hindu groups, 2% for Sikh and other faith groups and 1% for Buddhist. There has been minimal change for these groups since 2015.

The data for faith groups changes with firm size, reflecting the size of the Asian population in these firms. For example, 17% of lawyers in one partner firms are Muslim, compared to 2% of lawyers in the largest firms of 50 plus partners.

We have used attendance at a fee paying school and whether someone was the first in their generation to attend university, as a proxy for social mobility in this survey.

There has been no change since 2015, but the proportion of lawyers attending fee paying school fell by 4% between 2014 and 2015.

There is a difference between partners (24%) and solicitors (20%) who went to fee paying schools. The proportion of partners from fee paying schools in the largest firms (with 50 plus partners) has fallen from 43% to 36% since 2014

The firms which mainly do corporate law have the lowest proportion of state educated solicitors at 56%. Three quarters of solicitors in firms doing mainly criminal and litigation work are state educated (77 and 76% respectively) compared to just over half in corporate firms (56%).

First generation in the family to attend university

In contrast, there is a higher proportion of partners who were the first generation in their family to attend university (59%), compared to 49% of solicitors.

The proportion of partners who were the first generation to attend university is highest within the smallest firms and this decreases with size of firm. This ranges from 63% of partners in one partner firms, to 52% in firms with 50 plus partners.

The largest age group for other staff, is 25 to 34, who make up 30% of other staff in law firms. This is true for all firms regardless of size, although the proportion of people in this group ranges from 34% in the largest firms (50 plus partners) down to 26% in firms with two to five partners.

Almost a third of lawyers have primary caring responsibilities for children. It is slightly higher for partners (32%) than solicitors (31%). These differences are exaggerated when we look at the work type and size of firms:

There is a smaller proportion of people with primary caring responsibilities for children among other staff working in law firms at 24%, which ranges from 26% in one partner firms to 22% in the largest firms of 50 plus partners.

We have published a Risk Outlook paper entitled 'The Business Case for Diversity', which outlines the benefits of diversity for both the public and firms.