Two years after we licensed our first alternative business structures (ABSs), we have produced two reports which give an insight into:

This summary provides a synopsis of the key findings from the research, which includes:

A wide range of ABS applicants were invited to contribute their views, including those who made up the very first cohort of firms to apply for ABS licences. While the licensing process has changed significantly since these firms applied, it was considered important to capture a complete picture which will provide a benchmark for future reporting.

Both reports reflect the challenges we have faced in creating proportionate and effective licensing arrangements for a new form of legal entity. The feedback clearly shows that our performance at the start of the process did not achieve these aims and was not of the standard expected by our stakeholders. In acknowledging that our performance needed to be addressed, we have committed time and resource to making improvements to our approach and to the application process itself. The reports have provided important confirmation that we have been targeting the right issues, such as the overall speed of the process and the quality of information provided to applicants.

We are beginning to see the impact of these changes and are confident that the experience of current applicants is considerably different. In January the LSB also affirmed this view, saying that performance had "greatly improved" 1. However, we know there is still much more we must do. Our focus will continue to be on reducing the time taken to reach decisions and we are working towards a position where most applications will be decided within three months.

We will continue to seek feedback from applicants and use this research as a benchmark to monitor our progress against.

Summary findings from the research

The research shows the real diversity of firms with ABS status. Data on the characteristics of these firms shows a range of different sizes and varied geographical focus, from local to international. This diversity highlights the limitations of commenting on ABSs as a coherent and homogenous sub-segment of the legal services sector. In many cases, their legal status as an ABS is the only shared characteristic of these firms.

ABSs are active in most legal services sectors, but some sectors stand out as having higher concentration of ABSs operating within them. Our data shows that around a third of the turnover in the Personal Injury market is generated by ABSs. There are also relatively high concentrations of ABSs in the mental health, consumer and social welfare sectors. It is these areas of law where we may be most likely to start to see ABSs having a real impact on the experience of consumers.

Access to investment is shown to be a key motivator for many ABSs. It appears that this investment is typically being used in three distinct ways:

Our research also shows that firms viewed the adoption of an ABS model as an opportunity to strengthen their management teams through the introduction of non-legal managers. ABS business models also appear to be used to improve firms' succession planning. This may bring about further benefits as it helps to address risks to consumers, such as disorderly closure and abandonment, that occur when law firms have poor exit or succession plans.

Experiences of the ABS licensing process

Both reports identify that the duration of the ABS licensing process was a key issue for applicants. Only 12 percent of applicants agreed that their application had been dealt with in a timely manner, with nearly 83 percent of successful applicants saying that obtaining a licence had taken longer than originally expected. In many cases the time between the initial submission of an application and receiving a substantive response was of particular concern. Addressing the time taken to process ABS applications has been a key priority for us. Changes in our approach to licensing - with a stronger focus on the assessment of risk - coupled with improvements in the process itself, have contributed to a reduction in the time the process now takes.

Survey responses suggested that senior management time and licence fees were the main factors contributing to the overall cost of obtaining an ABS licence. Only a small proportion of applicants using the services of a consultant or external support to complete their application. We will continue to review the on-line support available to applicants to ensure that the licensing process is straight forward and clear.

The vast majority of feedback showed that applicants found our staff professional to deal with. However, we will continue to improve the style and substance of our communication with applicants. In particular, we will aim to reduce the perception of us as being bureaucratic to deal with, which was a view held by over half of respondents. The research suggested that applicants had positive experiences of engaging with us directly, but did not always understand why we asked for additional information in support of their applications. There was also evidence that our on-line information was not always easily accessible.

We have already introduced a number of improvements to our licensing process, these include:

Time taken to make a decision on ABS applications2 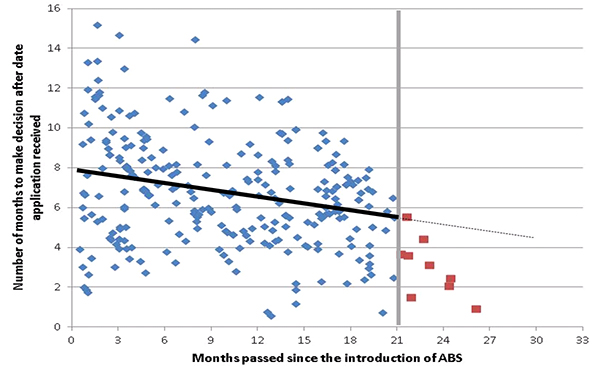 We recognise that there is more work to be done, but the research and our monitoring data suggests that our efforts are being targeted in the right areas and are delivering improvements.

Research on alternative business structures (ABSs): Findings from surveys with ABSs and applicants that withdrew from the licensing process, May 2014

Produced by our in-house research team, this report is based on two surveys: the first of firms which have received an ABS licence, and the second of those that have withdrawn from the licensing process. The findings are combined with SRA data to provide a high-level quantitative analysis of the experience of early ABS applicants and their impact on the legal services sector.

Researched and written independently by ICF GHK, this report provides a detailed qualitative review of a smaller sample of ABS applicants, exploring their experiences and identifying the different ways they are putting their ABS models into practice.