How diverse is the legal profession? 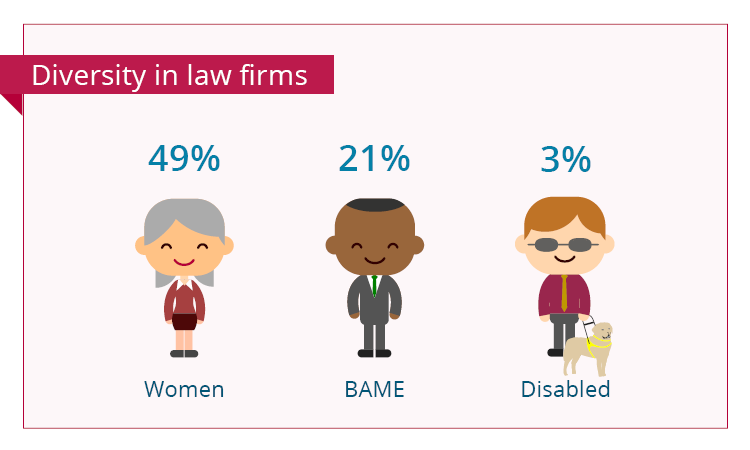 We collect diversity data from the law firms we regulate in England and Wales every two years. Our most recent collection was in Summer 2019, when 96% of law firms reported their data to us. This represented information from more than 186,000 people working in over 9,500 firms.

In collating their data firms ask their staff to respond to a standard set of diversity questions and then report their overall information to us.

In compiling our results, we present information by distinct groups as shown in the table below below:

We have set out the key findings for each of the diversity categories, including comparisons of the data between firms of different size and work type. We have included data where we have it, for solicitors who work in-house for comparative purposes. 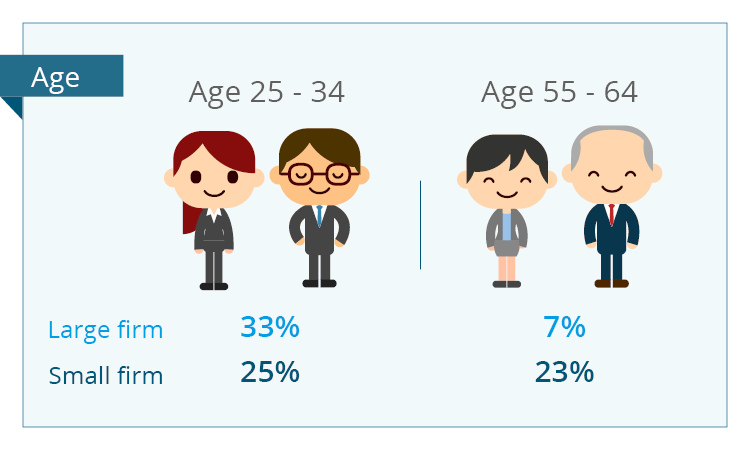 There is little change in the age profile of all lawyers (solicitors and partners) since 2017.

More than half (59%) of all lawyers are aged between 25 and 44.The data reflects the average career pattern of solicitors and when they might expect to become partners in a firm.

The largest age group for other staff, is 25 to 34, who make up 29% of other staff in law firms. This is true for all firms regardless of size, although the proportion of people in this group ranges from 33% in the largest firms (50 plus partners) down to 25% in one partner firms and firms with six to nine partners. 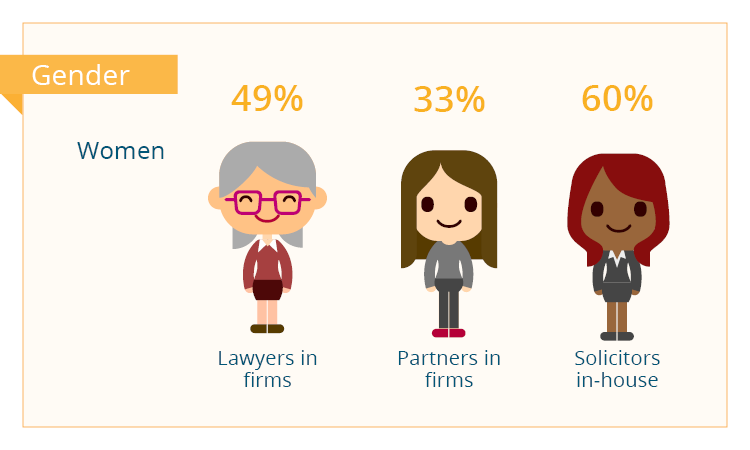 There is a greater proportion of female lawyers in mid-size and larger firms. Women make up:

There is a smaller proportion of female lawyers in smaller firms. Women make up

More than half (59%) of solicitors (ie those who are not partners) across all firms are female. There is a higher proportion of female solicitors in firms which have six to nine partners, 66% (up by 6% since 2014).

Overall 49% of lawyers are women but this varies by the type of legal work undertaken by firm:

Across all categories, the number of people who preferred to describe their gender other than as a man or woman, was less than 1%. Because the numbers are so small, we have not added this category into the law firm diversity tool.

The picture varies across the different groups of in-house solicitors with women making up:

For the first time in 2017, we asked whether people had a gender identity that was different from their sex as registered at birth. For reporting purposes, we have referred to this group as transgender or trans, although we recognise the term might not be the preferred term for everyone in this category.

We had the same response in 2019, with 2% of solicitors, 1% of partners and 2% of other staff confirming their gender identity was different to that assigned to them at birth (this is 1% overall for lawyers).

There is a lack of good quality statistical data about transgender people in the UK but the Gender Identity Research and Education Service gave evidence to the House of Commons Women and Equalities Committee (PDF 99 pages, 822KB), estimating that approximately 1% of the general population are trans.

The proportion of black, Asian and minority ethnic (BAME) lawyers working in law firms is 21% (no change since 2017). In 2018, Government figures on employment showed that 13% of the workforce in England, Scotland and Wales were BAME.

However, differences become apparent when we look at the breakdown of partners in firms by size. Both black and Asian lawyers are significantly underrepresented in mid to large size firms (those with six or more partners). The largest firms (50 plus partners) have the lowest proportion of BAME partners - only 8% (no change since 2017). This contrasts with one partner firms, where 36% of partners are from a BAME background (up 2% since 2017). The rate of increase in BAME partners in one partner firms from 2014 to 2019 (38%) is more than twice that of firms with 50+ partners (14%).

There are significant differences in the various categories of organisation where in-house solicitors work. For example, BAME solicitors make up: 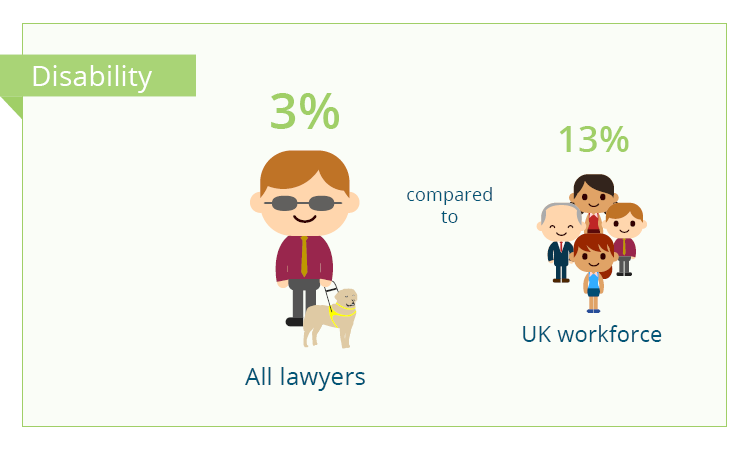 The proportion of people declaring a disability working in law firms (4%) is lower than the wider population, where disabled people make up 13% of the workforce in the UK. We found:

Although the numbers are small, there are some variations when we look further at the data:

A greater proportion of lawyers identify as lesbian, gay or bi-sexual (LGB) in law firms (3%) compared to the UK population in 2017 (2%). There has been no change for lawyers since 2014.

Although the numbers are small, there are some variations when we look further at the data, for example, there is a slightly lower proportion of lawyers who identify as LGB in one partner firms (2%) and a slightly higher proportion in the largest firms (10 and 50 plus partners).

Christians form the largest proportion of lawyers at 49% and this group has decreased steadily over the past five years (down by 8% since 2014). This compares to 52% in England and Wales, from the Annual Population Survey in 2018. Those who have no religion or belief (including those reporting as atheists) form the second largest group at 30% (no change since 2017) which compares to 38% in England and Wales.

The data for faith groups changes with firm size, reflecting the size of the Asian population in these firms. For example, 18% of lawyers in one partner firms are Muslim, compared to 3% of lawyers in the largest firms of 50 plus partners.

We started using new questions as a proxy for social mobility in 2019, using three standard questions from the Government recommend socio economic measures for the workforce (whose approach is recommended by the Sutton Trust).  We asked about school age education, the level of qualification achieved by parents and parental occupation. The first question was similar to the one in 2017 although there were more response categories provided. We have been able to compare this data to that collected in 2017 by conflating the response categories where appropriate. The second question was too different to allow any comparison with the data collected in 2017 and the third question was used for the first time in 2019.

There is a significant gap between lawyers and the general population, as 21% of lawyers attended fee paying schools (comprising 5% with a bursary and 16% without). This compares to the general UK population where 7% attended fee paying schools (2% with a bursary and 5% without). The figures for non-lawyer staff in law firms reflected the overall UK population stats.

There is a difference between partners and solicitors who attended a fee-paying school. 23% of partners (down by 1% since 2017), made of up 6% with and 17% without a bursary attended an independent or fee-paying school.  This compares to 19% of solicitors (down by 1% since 2017), made up of 4% with and 15% without a bursary. It's also notable that the larger firms (50+ partners) have the highest proportion of lawyers that attended private school (32%).

There are some differences between the parental qualifications of solicitors and partners:

10% of other staff had a parent who worked in routine manual and service occupations, compared with 6% of solicitors and 6% of partners. 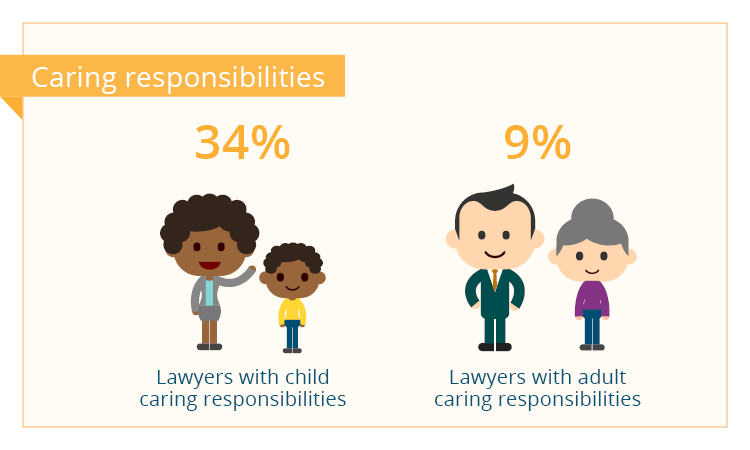 A third of lawyers have primary caring responsibilities for children (34%) which has risen 3% since 2014. The proportion is slightly higher for partners (36%) than solicitors (32%). These differences are exaggerated when we look at the work type and size of firms:

There is a smaller proportion of people with primary caring responsibilities for children among other staff working in law firms at 25%, which ranges from 26% in one partner firms to 22% in the largest firms of 50 plus partners. This is likely to reflect the younger age profiles we noted in these groups, and the general trend of people having children later in their life or career.

Nearly one in ten (9%) of lawyers said they have caring responsibilities for someone other than a child (mostly stating that they provide between 1 and 19 hours of care a week.) 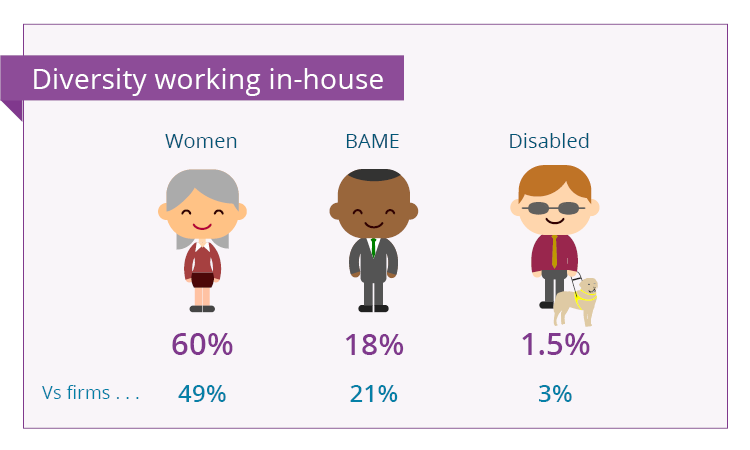 The table shows that we had an overall increase in response rates from lawyers in 2019 compared to 2017. The response rates increased this year for gender, transgender, school education, and child caring responsibilities. For all the other categories the response stayed the same.

There is a reduction in the prefer not to say rates for age and sexual orientation, and no change for the other questions.  Throughout the survey we have rounded all answers to the nearest whole number.

For the purposes of this research, firm size categories are based on the number of partners in a given firm.

Firms are classed as specialising in a particular work type category if they have told us that this area accounts at least half of the overall work they do.

We asked three questions to indicate social mobility, about school education, the level of parents' qualifications and parents' occupation.

The trans question was new in 2017 and a few firms have still not been able to include this in their questionnaire, which amounted to 7.4% of lawyers.